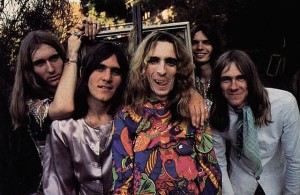 TMD has obtained extremely rare concert audio of the original ALICE COOPER group performing the song “Changing, Arranging” at The Whisky a Go Go in West Hollywood, California sometime in 1969. This was recorded around the release of their debut LP “Pretties For You”, an album plagued by poor production value. All that being said, historians say this is one of the best live recordings from the 60s known to exist.

The late sixties were a breeding ground for eclectic new music because easy listening and folk were starting to dominate the airwaves. The Alice Cooper Group was one of those acts that even Frank Zappa saw something special in (he later signed the band – originally called ‘The Spiders’ – to their first record deal), and eventually they would go on to smash through the international music mainstream with the 1970 hit “I’m Eighteen”. Along with Cooper, the band was comprised of lead guitarist Glen Buxton, rhythm guitarist Michael Bruce, bassist Dennis Dunaway, and drummer Neal Smith.

This ’69 audio is a gem like no other, for it’s truly a magical moment in Rock history. The listener will be treated to one of Rock’s most dangerous acts before the snakes were brought out on stage and Cooper elevated the game of ‘shock in music’ with fake public executions, all of which helped the 2011 Rock N Roll Hall of Fame inductees get all the way to the top. Sure, a few people got fake blood on themselves along the way… yes, decapitations went down – but come on, that’s what made it all so damn memorable.

“When I moved to L.A. with this little wimpy garage band, the first people we met were the Doors. Then we met Jimi Hendrix, Janis Joplin. All of the people who died of excess were our big brothers and sisters. So I said to myself: How do you become a legend and enjoy it? The answer is to create a character as legendary as those guys and leave that character on the stage.”