DIMEBAG: “Me And Vinnie Were The Heart And Soul Of PANTERA”

Just about a week away from the five year anniversary of Dimebag Darrell’s tragic on stage murder, TMD has unearthed a rare interview with the late great PANTERA/DAMAGEPLAN guitarist that took place roughly 7 months prior to his death on May 7th, 2004. The discussion took place over the phone conducted by Great Falls Tribune reporter Patrick Douglas, while Dime and DAMAGEPLAN were on tour somewhere in Oregon. Here are a few excerpts:

On his relationship with his brother Vinnie Paul Abbott:

MANOWAR – To Headline Masters Of Rock

MANOWAR’s epic Death To Infidels World Tour 2010 has added another date and another country. The band will headline the Masters Of Rock 2010 in Vizovice, Czech Republic on July 16, 2010. This is Manowar’s first festival performance in the Czech Republic since 2005.

Dates for DEVILDRIVER’s early-2010 headlining run with SUFFOCATION have been announced. GOATWHORE is also rumored for the tour, though the official support acts have yet to be confirmed.

The almighty METALLICA has issued the following statement:

“We’re jumping ahead to May as we continue to roll out the dates for 2010 a few at a time. It’s been over 20 years, so needless to say, we are looking forward to returning to Belfast on May 11 at the Odyssey. Tickets go on sale December 3 and Met Club members should check www.metclub.com for pre-sale info.”

Droogie “Mongo” has the 411 on last night’s gig (Sat, Nov 28th) at House of Blues in Myrtle beach, South Carolina:

“It was mine and my wife’s first time seeing a show at the House of Blues as well as our first Megadeth show, and we were definitely NOT disappointed! We got to meet the guys before the show, got autographs and pictures with them, and left extremely impressed with how genuinely nice they all were. Especially Dave, for letting my wife try to take our picture together a second time after it messed up the first!

Arcanium opened the show, and while we missed the first 15 minutes or so of their set due to us doing the meet & greet, what we did catch of them was really good...
Read More

The album will be released via Candlelight Records on February 9, 2010.
Read More

Matt Arluck, guitar player for Chicago, Illinois (USA) outfit SWEET COBRA has passed away after a battle with cancer. Details are still developing, though it’s been reported in recent years Arluck had multiple surgeries to remove tumors from his liver and spine.

TMD sends our condolences out to his friends and loved ones.

Swedish power metal act DREAM EVIL have signed a worldwide deal with Century Media Records. The band will be releasing an album entitled In the Night in 2010. 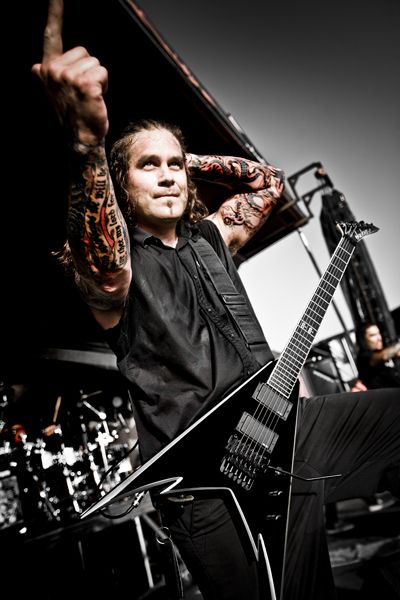 Seventeen years ago, American groove metal band MACHINE HEAD was founded by Robb Flynn and bassist Adam Duce in Oakland, California. The band delivered a solid debut in 1994 with Burn My Eyes (featuring Chris Kontos on drums) and followed that up with The More Things Change (’97), which introduced drummer Dave McClain, The Burning Red (’99), and Supercharger (’01).

Entering into the picture officially in 2003, lead guitarist Phil Demmel (who had played with Flynn in the earlier Bay Area thrash act VIO-LENCE) soon became regarded as one of modern heavy metal’s elite, having played brilliantly on Through The Ashes Of Empires (’03) and 2007’s
undisputed masterpiece The Blackening.